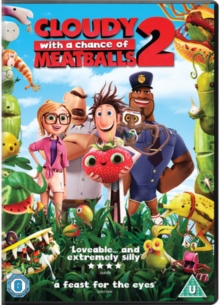 Cloudy With a Chance of Meatballs 2 DVD

Following his invention of a machine capable of turning water into food, madcap scientist Flint Lockwood (Hader) is offered employment at the Live Corp Company, a prestigious facility where the greatest minds are given free rein to pursue their ideas.

There he works with his idol Chester V (Will Forte) and his assistant Barb (Kristen Schaal), an orang-utan in possession of a human brain thanks to the experiments of Chester.

However, what seems an ideal life for Flint is thrown into turmoil when he discovers that his most famous invention is being used to create bizarre creatures that are half-animal and half-food, such as tacodiles, shrimpanzees and apple pie-thons.

Can Flint and his friends put a stop to the chaos?