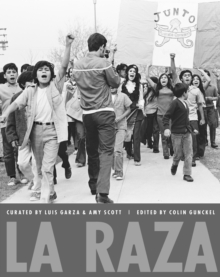 La Raza, launched in 1967 in the basement of an East LA church, was conceived as a tool for community-based organizing during the early days of the Chicano movement.

The all-volunteer staff of the newspaper, and the magazine that followed, informed their readers and exhorted them to action through images and articles that showcased protests and demonstrations and documented pervasive social inequity and police abuse.

La Raza's photographers played a critical role as artists, journalists, and activists, creating an unparalleled record of the determination, resilience, and achievements of the Chicano community during a period of profound social change.

The essays offer not only scholarly assessments of the role of Chicano photographers in social movements and art history but also personal perspectives from La Raza photographers. This catalog presents photographs drawn from La Raza, an exhibition at the Autry Museum of the American West and a collaboration between the museum and the UCLA Chicano Studies Research Center, which houses a collection of nearly 25,000 La Raza photographic images.