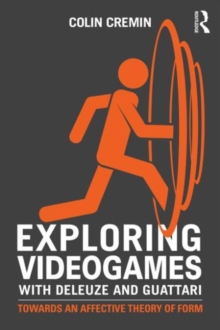 Exploring Videogames with Deleuze and Guattari : Towards an affective theory of form Paperback / softback

Videogames are a unique artistic form, and to analyse and understand them an equally unique language is required.

Cremin turns to Deleuze and Guattari's non-representational philosophy to develop a conceptual toolkit for thinking anew about videogames and our relationship to them.

Rather than approach videogames through a language suited to other media forms, Cremin invites us to think in terms of a videogame plane and the compositions of developers and players who bring them to life.

According to Cremin, we are not simply playing videogames, we are creating them.

We exceed our own bodily limitations by assembling forces with the elements they are made up of.

The book develops a critical methodology that can explain what every videogame, irrespective of genre or technology, has in common and proceeds on this basis to analyse their differences.

Drawing from a wide range of examples spanning the history of the medium, Cremin discerns the qualities inherent to those regarded as classics and what those qualities enable the player to do. Exploring Videogames with Deleuze and Guattari analyses different aspects of the medium, including the social and cultural context in which videogames are played, to develop a nuanced perspective on gendered narratives, caricatures and glorifications of war.

It considers the processes and relationships that have given rise to industrial giants, the spiralling costs of making videogames and the pressure this places developers under to produce standard variations of winning formulas.

The book invites the reader to embark on a molecular journey through worlds neither 'virtual' nor 'real' exceeding image, analogy and metaphor.

With clear explanations and detailed analysis, Cremin demonstrates the value of a Deleuzian approach to the study of videogames, making it an accessible and valuable resource for students, scholars, developers and enthusiasts.