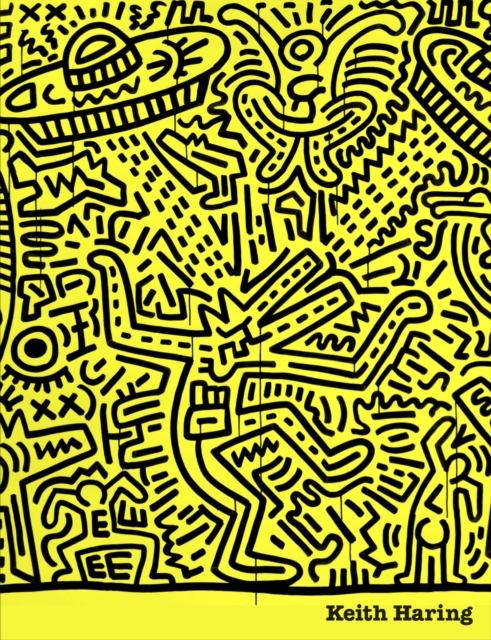 Keith Haring (1958 -1990) is widely recognised for his colourfulpaintings, drawings, sculptures and murals.

Haring exploded onto theearly 1980s New York art scene with his vivid graffiti-inspired drawings,many of which found exposure in the public realm, such as the TimesSquare billboard broadcast of his famous Radiant Child in 1982. Haring's instantly recognisable `cartoon-like' imagery not only drew onthe iconography of contemporary pop and club culture but also lookedback to the patterns and rhythms of Islamic and Japanese art, andprimitive wall-paintings,.

Furthermore his work also reflected a profoundcommitment to social justice and activism, and raised numerousissues that remain relevant today, including the AIDS crisis, the ColdWar and fear of nuclear attack, racism, the excesses of capitalism andenvironmental degradation. Featuring around fifty works supported by rarely seen photography,film and archival documents from the Keith Haring Foundation, thisaccessible book will not only introduce Haring to a new audience butalso throw fresh light on an artist whose work remains symptomatic ofthe subcultural and creative energy of 1980s New York. Three short texts exploring various aspects of Haring's practicewill be interspersed with illustrations of his works and a rolling time-linefeaturing key social and political events of the 1980s (from the electionof Reagan in 1980 and the explosion of hip hop from undergroundmovement to global phenomenon to the fall of the Berlin Wall in 1989)and Haring's responses to them.

The publication also aims to includeselect and unpublished reminiscences from those who collaboratedand interacted with Haring, including performers such as Madonna andGrace Jones and artists Jenny Holzer and Yoko Ono.