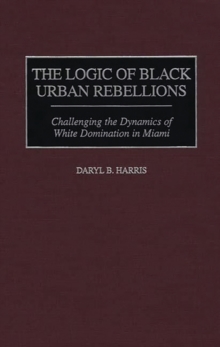 The Logic of Black Urban Rebellions : Challenging the Dynamics of White Domination in Miami Hardback

by Daryl B. Harris

The urban rebellions that rocked Miami in 1980, and other large cities in the United States during the 1960s, can be looked at as contributory components of the Black freedom movement.

This new study argues that they are, on one level, a tactical response to contemporary forms of White domination and, on another level, an act in which key core values of the African American experience are sustained.

The book provides an overview of racial violence in America, from the slaveocracy of the 18th and 19th centuries, to the urban rebellions of the late 20th century.

It shows that in Black-White intergroup relations, Whites have used violence and the threat of violence to repress and intimidate Blacks.

Blacks have used violence as a way of resisting White domination.

The form that violence has taken has been shaped by prevailing societal conditions. Importantly, the book concentrates on the essence of Black-White intergroup relations.

In doing so, the thematic and cultural propensities that pattern the reality of those relations are clearer.

Foremost is the practice of White domination and the Black response of resistance, which seeks to end that domination and encourage freedom and justice.

The book ends by going beyond current thinking and looks to African American core values as key referents to examine Black violence.