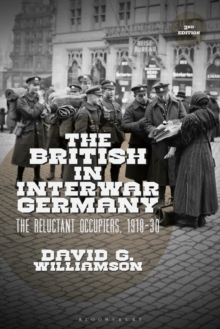 The British in Interwar Germany : The Reluctant Occupiers, 1918-30 Paperback / softback

The British in Interwar Germany analyses the British presence in Germany from the armistice until the end of the Rhineland occupation in 1930.

It looks at British involvement in the Rhineland, Danzig, Upper Silesia, Schleswig and East Prussia and on the inter-Allied Control Commissions (IAMCC), which were supervising German disarmament. Drawing widely on a range of primary sources, David Williamson explores the problems facing British military and civil officials, their attitudes towards the Germans and their relations with their allies - particularly the French.

The book also examines the everyday lives of the British soldiers and administrators in Germany and their interaction with the Germans, with particular attention being paid to the city of Cologne and the British colony that developed there. This new edition brings David Williamson's study fully up-to-date and now contains a greater coverage of the relevant social history, as well as maps, illustrations and a useful glossary.

The British in Interwar Germany will be of great interest to students and scholars of Weimar Germany and Britain and Europe during the interwar years.