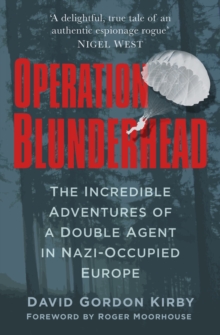 Operation Blunderhead : The Incredible Adventures of a Double Agent in Nazi-Occupied Europe Hardback

In the autumn of 1942, British Special Operations Executive agent Ronald Sydney Seth was parachuted into German occupied Estonia, supposedly to carry out acts of sabotage against the Nazis in a plan code-named Operation Blunderhead.

Uniquely, it was Seth and not the SOE who had engineered the mission, and he had no support network on the ground.

It was a failure. Captured by Estonian militia, Seth was handed over to the Germans for interrogation, imprisoned and sentenced to death, but managed to evade execution by convincing his captors that he could be an asset.

What happened between Seth's capture and his return to England in the dying days of the war reads, at times, like a novel - inhabiting a Gestapo safe house, acting as a stool pigeon, entrusted with a mission sanctioned by Heinrich Himmler - yet much of it is true, albeit highly embellished by Seth, who was quite capable of weaving the most elaborate fantasies.

He was an unlikely hero, whose survival owed more to his ability to spin a tale than to any daring qualities. Operation Blunderhead is a compelling and original account of an extraordinary episode of the Second World War - a brilliant blend of fact and fiction, contrasting material taken from SOE and MI5 files with Seth's own fantastical story.