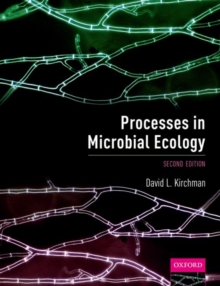 Microbial ecology is the study of interactions among microbes in natural environments and their roles in biogeochemical cycles, food web dynamics, and the evolution of life.

Microbes are the most numerous organisms in the biosphere and mediate many critical reactions in elemental cycles and biogeochemical reactions. Because they are essential players in the carbon cycle and related processes, microbial ecology is a vital science for understanding the role of thebiosphere in global warming and the response of natural ecosystems to climate change.

This second edition has been fully revised, restructured, and updated while remaining concise and accessible.

It discusses the major processes carried out by viruses, bacteria, fungi, protozoa and other protists - the microbes - in freshwater, marine, and terrestrial ecosystems.

The focus is on biogeochemical processes, starting with primary production and the initial fixation of carbon into cellular biomass, before exploring how that carbon is degraded in both oxygen-rich (oxic) andoxygen-deficient (anoxic) environments.

These processes are in turn affected by ecological interactions, including competition for limiting nutrients, viral lysis, and predation by various protists in soils and aquatic habitats.

The book neatly connects processes occurring at the micron scale to eventshappening at the global scale, including the carbon cycle and its connection to climate change issues.

A final chapter is devoted to symbiosis and other relationships between microbes and larger organisms.

Microbes have huge impacts not only on biogeochemical cycles, but also on the ecology and evolution of more complex forms of life, including humans.