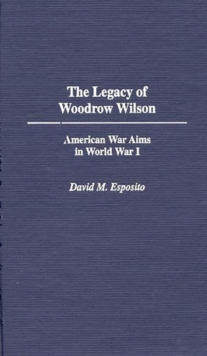 The Legacy of Woodrow Wilson : American War Aims in World War I Hardback

Wilson viewed Imperial Germany as a threat to U.S. national security and acted accordingly. His urgent desire to mediate an end to World War I was driven by geo-political concerns.

Forced into the war by tertiary issues, he decided to throw a great deal of weight upon the scale by intervening decisively in the Great War in order to dominate the postwar peace conference.

There he intended to dictate a scientific peace and to create a League of Nations to insure collective security.