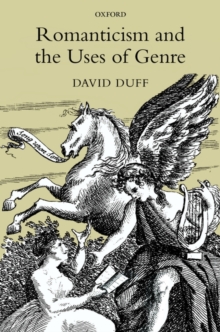 Romanticism and the Uses of Genre Hardback

by David (Professor of English, University of Aberdeen) Duff

This wide-ranging and original book reappraises the role of genre, and genre theory, in British Romanticism.

Analyzing numerous examples from 1760 to 1830, David Duff examines the generic innovations and experiments which propel the Romantic 'revolution in literature', but also the fascination with archaic forms such as the ballad, sonnet, epic, and romance, whose revival and transformation make Romanticism a 'retro' movement as well as a revolutionary one.

Thetension between the drives to 'make it old' and to 'make it new' generates one of the most dynamic phases in the history of literature, whose complications are played out in the critical writing of the period as well as its creative literature.

Incorporating extensive research on classification systems and reception history as well as on literary forms themselves, Romanticism and the Uses of Genre demonstrates how new ideas about the role and status of genre influenced not only authors but also publishers, editors, reviewers, and readers.

The focus is on poetry, but a wider spectrum of genres is considered, a central theme being the relationship - hierarchical, competitive, combinatory - between genres.

Among the topicsaddressed are generic primitivism and forgery; Enlightenment theory and the 'cognitive turn'; the impact of German transcendental aesthetics; organic and anti-organic form; the role of genre in the French Revolution debate; the poetics of the fragment and sketch; and the theory and practice of genre-mixing.

Unprecedented in its scope and detail, this important book establishes a new way of reading Romantic literature which brings into focus for the first time its tangled relationship with genre.