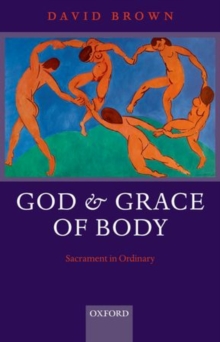 God and Grace of Body : Sacrament in Ordinary Paperback / softback

David Brown explores the ways in which the symbolic associations of the body and what we do with it have helped shape religious experience and continue to do so.

A Church narrowly focused on Christ's body wracked in pain needs to be reminded that the body as beautiful and sexual has also played a crucial role not only in other religions but also in the history of Christianity itself.

Dance was one way in which the connection was expressed.

The irony is not that sucha connection has gone but that it now exists almost wholly outside the Church.

Much the same could be said about music more generally, and Brown writes excitingly about the spiritual potential of not just classical music but also pop, jazz, musicals, and opera.

Like Brown's much-praised earliervolumes, God and Enchantment of Place, Tradition and Imagination, and Discipleship and Imagination, the present book will enlarge horizons and challenge the narrowness of much theological thinking.