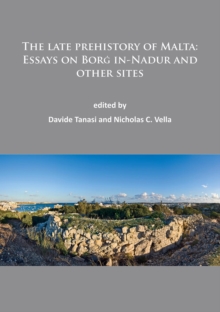 The late prehistory of Malta: Essays on Borg in-Nadur and other sites Paperback / softback

Borg in-Nadur, on the south-east coast of the island of Malta, is a major multi-period site, with archaeological remains that span several thousand years.

In the course of the Late Neolithic, the steep-sided ridge was occupied by a large megalithic temple complex that was re-occupied in the succeeding Bronze Age.

In the course of the second millennium BC, the ridge was heavily fortified by a massive wall to protect a settlement of huts.

This volume brings together a number of contributions that report on those excavations, providing an exhaustive account of the stratigraphy, the pottery, the lithic assemblages, the bones, and the molluscs.

Additional studies look at other sites in Malta and in neighbouring Sicily in an effort to throw light on the late prehistory of the south-central Mediterranean at a period when connections with regions near and far were increasing.

The volume forms a companion to another monograph which concentrated on the temple remains at Borg in-Nadur (D.

He has authored a hundred scientific papers in these fields and produced 3D documentaries about Sicilian archaeology and cultural heritage.

Vella (Monza, 2011). He is editor of the international scientific journal Open Archaeology (De Gruyter) and since 2012, he has been directing the Field School in Archaeology of Arcadia University in Sicily.

Nicholas C. Vella is Senior Lecturer and Head of the Department of Classics and Archaeology at the University of Malta, and works on Mediterranean history and archaeology.

He has co-edited another volume of essays on Malta's late prehistory called Site, Artefacts and Landscape: Prehistoric Borg in- Nadur, Malta with Davide Tanasi (Monza, 2011) and contributed, with him, to the Cambridge Prehistory of the Bronze and Iron Age Mediterranean edited by P. van Dommelen and B. Knapp (Cambridge, 2014). He edits the Malta Archaeological Review, and co-directs excavations at the Zejtun Roman Villa (Malta).

He is also co-investigator of the FRAGSUS project, funded by the European Research Council, that is examining the environmental and cultural background of prehistoric Malta.