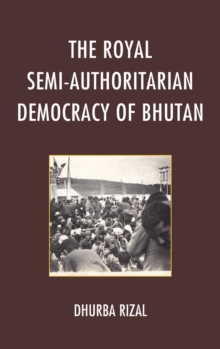 The book puts into plain words a changing dimension of politics in a traditional regime and offers an insight into the emerging transition to royal, semi-authoritarian democracy in Bhutan.

Bhutan represents a political system which coalesces the rhetorical acquiescence of democracy with illiberal authoritarian attributes under the former royalist shadow.

Royal democracy is a myth and only paints the frontage of democracy.

The political reforms in Bhutan were orchestrated by the "traditional regime and elites in a traditional society" as a tightly controlled, top-down process without devolution of power outside the regime.

Royal Democracy can best be understood as an attempt to construct a political regime that impersonates democratic institutions but works outside the logic of political representation and seeks to repress any vestige of genuine political pluralism.

Exploring the authoritarian logic behind the democratic rhetoric is especially important for Bhutan, which is today glorified by the UN as "The Mecca of Gross National Happiness" and depicted by many as a model of top down democracy on popular media and in academia. Holding State controlled elections alone does not create a cure for deeper political, economic, and social predicaments besetting Bhutan and does not create a solid foundation for democratic transition.

The glitter of royal, semi-authoritarian democracy is a "Jigmecracy," an old Jigme's system with new labels, a classic case of transition from a traditional regime in a traditional society.