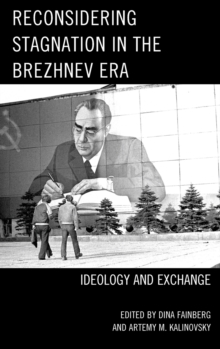 Reconsidering Stagnation in the Brezhnev Era : Ideology and Exchange Hardback

This volume contributes to a growing reevaluation of the Brezhnev era, helping to shape a new historiography that gives us a much richer and more nuanced picture of the time period than the stagnation paradigm usually assigned to the era.

The essays provide a multifaceted prism that reveals a dynamic society with a political and intellectual class that remained committed to the ideological foundations of the state, recognized the challenges that the system faced, and embarked on a creative search for solutions.

The chapters focus on developments in politics, society, and culture, as well as the state's attempts to lead and initiate change, which are mostly glossed over in the stagnation narrative.

The volume challenges the assumption that the period as a whole was characterized by rampant cynicism and a decline of faith in the socialist creed and instead points to the persistence of popular engagement with the socialist ideology and the power it continued to wield within the Soviet Union.