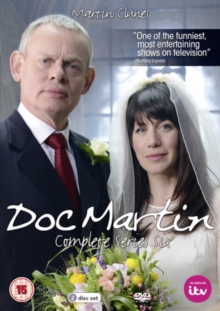 All eight episodes from the sixth series of the ITV comedy drama starring Martin Clunes as the belligerent Dr Martin Ellingham, whose bad manners and unusual ways cause tension among the locals in the picturesque Cornish village of Portwenn.

In this series, Martin (Clunes) and Louisa (Caroline Catz) finally tie the knot, Ruth (Eileen Atkins) moves into a new house following an incident with a stalker and hypochondriac Malcolm (Christopher Fairbank) gets a troubling diagnosis.

The episodes are: 'Sickness and Health', 'Guess Who's Coming to Dinner', 'The Tameness of a Wolf', 'Nobody Likes Me', 'The Practice Around the Corner', 'Hazardous Exposure', 'Listen With Mother' and 'Departure'.