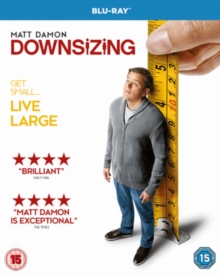 Looking for a fresh start, Paul signs up for a revolutionary new procedure which shrinks humans down to be five inches tall and enables them to live in a miniaturised world, a move which promises financial stability and a better quality of life.

However, soon after making the change Paul discovers that Audrey changed her mind at the last minute, leaving him to find his way in the miniature world on his own.