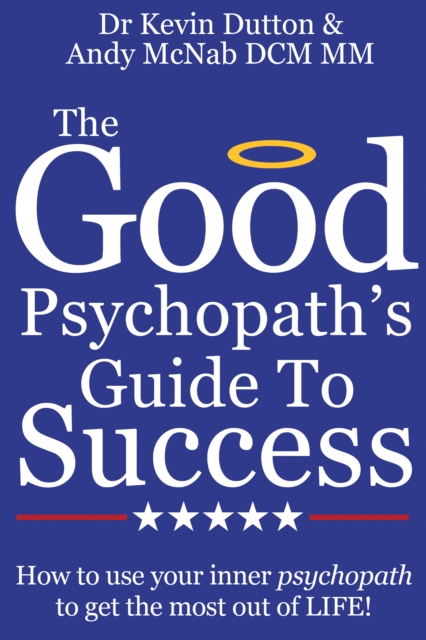 The Good Psychopath's Guide To Success : How to use your inner psychopath to get the most out of life EPUB

What is a good psychopath? And how can thinking like one help you to be the best that you can be?

In this compelling guide, packed with insightful, interactive quizzes, SAS legend Andy McNab and Oxford University psychologist Dr Kevin Dutton will help you improve qualities such as charm, coolness, courage and confidence to help you get the very best out of life and your career.
Drawing on the heroic military career of McNab (a confirmed good psychopath) and Duttonâ€™s lifetime of research, The Good Psychopath's Guide to Success will help you find out if you are a good psychopath â€“ and if youâ€™re not, how you can behave like one.

A surprising number of us are good psychopaths â€“ people who can control qualities such as fear, indecision and conscience to shine in a variety of situations. Are you one of them?

Professor Kevin Dutton has spent a lifetime studying psychopaths. He first met SAS hero Andy McNab during a research project. What he found surprised him. McNab is a diagnosed psychopath but he is a GOOD PSYCHOPATH. Unlike a BAD PSYCHOPATH, he is able to dial up or down qualities such as ruthlessness, fearlessness, conscience and empathy to get the very best out of himself - and others - in a wide range of situations.

Drawing on the combination of Andy McNab's wild and various experiences and Professor Kevin Dutton's expertise in analysing them, together they have explored the ways in which a good psychopath thinks differently and what that could mean for you.

What do you really want from life, and how can you develop and use qualities such as charm, coolness under pressure, self-confidence and courage to get it?

The Good Psychopath Manifesto gives you a unique and entertaining roadmap to self-fulfillment both in your personal life and your career.

â€œBehaving like a psychopath could help you in your career and love life.â€ Daily Telegraph

â€œAre YOU a psychopath (and could it be the secret to success)? New book reveals why having their character traits is vital to winning life's battles.â€ Daily Mail

Professor Kevin Dutton is a research psychologist at the Calleva Research Centre for Evolution and Human Science, Magdalen College, University of Oxford. He is a fellow of the Royal Society of Medicine and of the Society for the Scientific Study of Psychopathy. He is the author of two acclaimed books: Flipnosis: The Art of Split-Second Persuasion; and more recently The Wisdom of Psychopaths. He lives in the Cotswolds.

From the day he was found in a carrier bag on the steps of Guy's Hospital in London, Andy McNab has led an extraordinary life.

As a teenage delinquent, Andy McNab kicked against society. As a young soldier he waged war against the IRA in the streets and fields of South Armagh. As a member of 22 SAS he was at the centre of covert operations for nine years - on five continents. During the Gulf War he commanded Bravo Two Zero, a patrol that, in the words of his commanding officer, 'will remain in regimental history for ever'. Awarded both the Distinguished Conduct Medal (DCM) and Military Medal (MM) during his military career, McNab was the British Army's most highly decorated serving soldier when he finally left the SAS.

Since then Andy McNab has become one of the world's bestselling writers, drawing on his insider knowledge and experience. As well as three nonfiction bestsellers including Bravo Two Zero, the bestselling British work of military history, he is the author of the bestselling Nick Stone thrillers. He has also written a number of books for children.

Besides his writing work, he lectures to security and intelligence agencies in both the USA and UK , works in the film industry advising Hollywood on everything from covert procedure to training civilian actors to act like soldiers and he continues to be a spokesperson and fundraiser for both military and literacy charities.