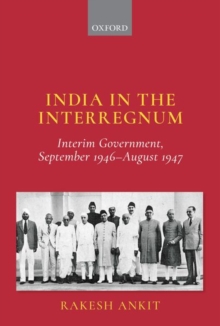 This book is about India's Interim Government, in office from 2 September 1946 till August 1947, and some of its provincial counterparts.

The Interim Government was a unique coalition of the Indian National Congress, All-India Muslim League, and non-Congress, non-League political figures.

Further, it presided over a British/British-trained state apparatus in a time of transition.

Overlooked by the historiography of the period, given its sole identification withfreedom/Partition/end of empire, it was important in its own right.

The eleven months from September 1946 to August 1947 were packed as much with the formal exit of the empire as its informal continuance; as much with the anticipation of Partition as its alternatives.

Alongside, this last government ofBritish India attempted to govern too, with legacies for its independent successor(s).

Rather than looking at its existence as just another event on the road to Partition, this book seeks to restore identity to the Interim Government, its personalities and their body of work, which illustrate the 'continuity and change' paradigm of post-1945 India.