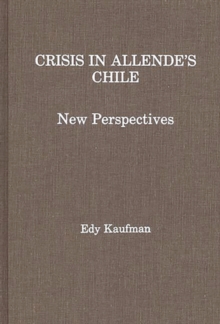 This book takes a fresh look at the role the United States Government and the Chilean military played in the overthrow of the Allende government.

It addresses four specific topics. Part I focuses on official and non-official United States intervention and examines other actors in the international system.

Part II covers special interest groups (the Catholic church, women's organizations, trade unions, and others), the Chilean military, the Political Opposition, the political structure of Chile, and the economic situation.

Part III discusses the problems within the decision-making elite.

The author's concluding chapter offers new perspectives on the overthrow of Allende in Chile.