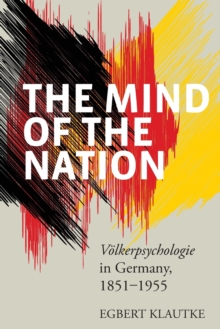 Voelkerpsychologie played an important role in establishing the social sciences via the works of such scholars as Georg Simmel, Emile Durkheim, Ernest Renan, Franz Boas, and Werner Sombart.

In Germany, the intellectual history of 'folk psychology' was represented by Moritz Lazarus, Heymann Steinthal, Wilhelm Wundt and Willy Hellpach.

This book follows the invention of the discipline in the nineteenth century, its rise around the turn of the century and its ultimate demise after the Second World War.

In addition, it shows that despite the repudiation of "folk psychology" and its failed institutionalization, the discipline remains relevant as a precursor of contemporary studies of "national identity".