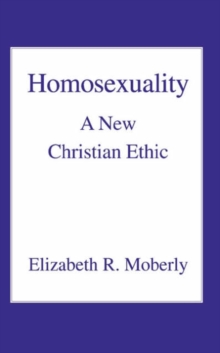 In the debate about homosexuality one thing that seems clear - on an issue renowned for lack of clarity and controversy - is that two fundamentally incompatible positions continue to hold tenaciously.

One asserts that homosexual acts are legitimate, the other that they are not.

Concentration on the legitimacy of sexual expression rather than on underlying needs has made the debate about homosexuality incapable of resolution.

Homosexuality: A New Christian Ethic presents a psychoanalytic interpretation that has shifted the focus of the debate from symptoms to root causes.

The crux of Elizabeth Moberly's argument is that 'the homosexual condition involves legitimate developmental needs, the fulfilment of which has been blocked by an underlying ambivalence to members of the same sex'.

But while the argument is certainly controversial, it involves a much-needed restatement of the traditional Christian distinction between the homosexual condition and its expression in homosexual activity.

Formerly published as a James Clarke and Co Ltd title.