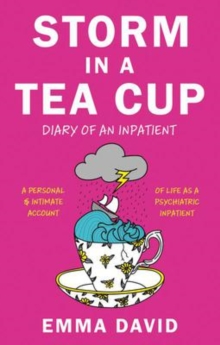 Storm in a Tea Cup : Diary of an Inpatient Paperback / softback

Aged twenty-one, Emma David found herself stuck; torn between wanting to live and wanting to die.

After a long history of mental health problems, an unknown diagnosis of borderline personality disorder and a subsequent suicide attempt, she was referred as an inpatient at what was to become two different psychiatric facilities. The first quickly descended into an underworld of hidden self-harm, eating disorders, drugs, and sexual predators and Emma's problems gathered in momentum the longer she was there, combined with the backdrop of the other extremely unstable patients.

The second was altogether very different; an intensive structure, as well as an insightful and challenging therapist.

Could it be the place for Emma to turn her life around?Raw, honest and satirically funny at times, Storm in a Teacup lifts the lid on the otherwise private and unseen world of mental health.