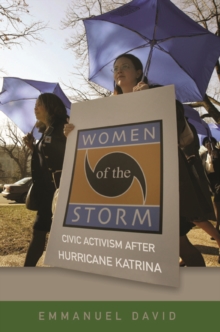 Hurricanes Katrina and Rita made landfall less than four weeks apart in 2005.

Months later, much of New Orleans and the Gulf Coast remained in tatters.

As the region faded from national headlines, its residents faced a dire future.

Emmanuel David chronicles how one activist group confronted the crisis.

Founded by a few elite white women in New Orleans, Women of the Storm quickly formed a broad coalition that sought to represent Louisiana's diverse population.

From its early lobbying of Congress through its response to the 2010 BP oil spill, David shows how members' actions were shaped by gender, race, class, and geography.

Drawing on in-depth interviews, ethnographic observation, and archival research, David tells a compelling story of collective action and personal transformation that expands our understanding of the aftermath of an historic American catastrophe.