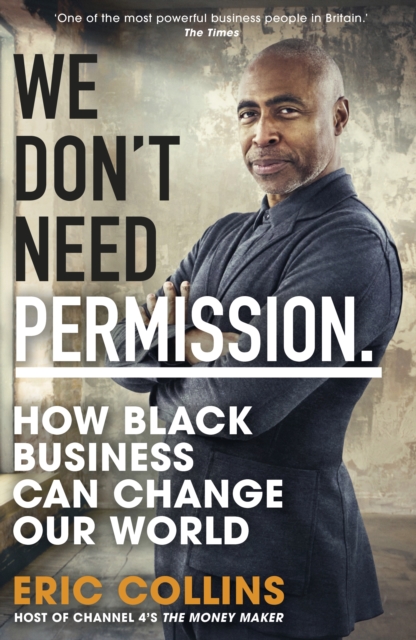 We Don't Need Permission : How black business can change our world Hardback

A powerful 10 step guide to transformative entrepreneurship for under-represented people from Eric Collins, host of the award-winning Channel 4 reality business show The Money Maker. 'Eric Collins is one of the most powerful business people in Britain.' The Times__________Step 1: Embrace the unexpectedStep 2: Engage in consistent and continuous acts of disruptionStep 3: Let go of small - think bigger, think global and prepare for pitfallsStep 4: Take risks using data to mitigate the downsideStep 5: Put your money where your mouth is, make your resources matterStep 6: Leverage what you knowStep 7: Become a convener by making your mission bigger than yourselfStep 8: Invest in women to create AlphaStep 9: Sell your vision, make time-appropriate asks and don't forget to recruit alliesStep 10: Always bet on Black________________________At a time when half of Black households in the UK live in persistent poverty - over twice as many as their white counterparts - We Don't Need Permission argues that investing in Black and under-represented entrepreneurs in order to create successful businesses is the surest, fastest socio-economic game-changer there is.

Long-lasting economic empowerment - from education to health outcomes - is key to solving the multiple problems that result from systemic racism and sexism. And it is the best way to close the inequality gaps that have hampered and continue to hinder Black people and all women too.

To address this problem head on, Eric Collins co-founded venture capital firm Impact X Capital to invest in under-represented entrepreneurs in the UK and Europe. In We Don't Need Permission, Collins identifies ten key principles of successful entrepreneurship, and reveals how it's possible to change a system that has helped some, while holding others back.

The book not only aims to inspire and motivate under-represented people to take their future and economic destiny into their own hands, but will demand of current business leaders and organizations that they do business better. It's time to stop waiting for someone else to give permission and start boldly making the world we want to see. __________