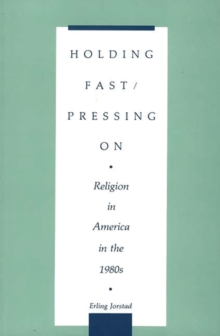 Holding Fast/Pressing On : Religion in America in the 1980s Paperback / softback

Jorstad has written the first comprehensive history of American religion in the past decade.

Drawing on many contemporary sources, he divides religion in the Eighties into three sections, each characterized by its own struggle.

Evangelicals are confronting scandals, politics, and the pressures of the mass media.

Private seekers, which the author sees as the wave of the future, swing between quietistic New Age philosophies and the desire for world transformation.

Everywhere the tension is between the conservatives holding fast and the liberals pressing on.

While Jorstad clearly sympathizes with the latter, he presents a balanced picture of recent religious history.

An excellent work of social and historical analysis with insights for the future.

Recommended for academic and public libraries. Library JournalDuring the 1980s, some of the most far-reaching and dramatic changes in American life were those occurring in religious life.

Battles over abortion, televangelist morality scandals, responding to AIDS, gender issues, and American political policy toward South Africa are just a few of the major issues that made front-page news.

This comprehensive history of American religion in the 1980s explores these and other issues, beginning with their historical background in the great awakening of the 1960s counterculture.

It proceeds to trace the contours of the holders fast/pressers on battle (conservatives vs. moderates and liberals) in three areas: mainline struggles over denominational identity, social gospel outreach, and gender issues; evangelical struggles over involvement in office-seeking politics, televangelist morality, and popularization of traditional teaching; and privatized seeking of fulfillment through personal relationships, inner spiritual growth, and pursuit of the promises of New Age transformations of self and society.

Using contemporary writings, interviews, reports, and other primary documents of the times as well as drawing on the interpretations of specialists in contemporary religious life, Jorstad throroughly explores every aspect of the themes covered. In Part I, the book focuses on mainliners, documenting the decline of ecumenical energy and the sources and results of the fierce internal battles within mainline denominations over holding to older identities at the expense of extensive involvement in the major social crises of the day.

Within the evangelical/fundamental section, the book examines the effects of the Falwells, Robertsons, and others in elective national politics and to what extent this movement depended on the leadership in the White House.

Evangelism's expression through and use of mass media is also addressed.

The third major trend, privatization (largely New Age), is examined with attention to how seekers sought fulfillment through improving the quality of their relationships with partner, spouse, family, friends, and local community.

The leadership of such interpreters as Scott Peck, James Dobson, Charles Swindoll, and Robert Schuller is also examined in detail.

The final chapter explores the history, spread, and impact of New Age faith on the religious expression of the 1980s.

Holding Fast/Pressing On is the first full-length account of the major developments of religion during the decade.

It breaks new ground in using sociological theory to interpret the importance of the search for the self and will be of interest to students of American religious history and life, contemporary social trends and problems, and mass media, politics and religion.