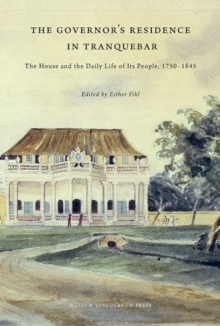 Governors Residence in Tranquebar : The House & the Daily Life of Its People, 17501845 Hardback

In 1620 the first Danish settlement on the Indian subcontinent was established in the small fishing village of Tranquebar facing the Indian Ocean on the Coromandel Coast of south India.

For the next 225 years, until it was sold to the British in 1845, Tranquebar functioned as a colonial trading station under the Danish flag.

From 1784 onwards the Danish governor of Tranquebar lived in a grandiose and beautiful mansion built in a unique style of colonial architecture.

This book uses that particular house as a prism through which the authors present and analyse such topics as the architecture and furnishing of the building; the emotions of feeling both at home and away experienced by the governors and their families; the cultural encounters and exchanges that took place between residents of the house and their Indian staff as well as the broader Indian community of traders, temple priests and princely delegates; the intricate political landscapes all governors had to navigate, balancing pressures from other powers in the area, both Indian and European; and the status of Tranquebar as a representative of Denmark injected into an Indian setting dominated by castes suspended in complicated webs of economic exchange and rituals of rank and identity.

Presenting stories from Danish Tranquebar, a minor player on the Indian continent, the book is able to apply new analytical perspectives to international politics and alliances on the Indian subcontinent during this period and to nuance the study of cultural contacts with Europea study which has generally been determined by the predominance of British colonialism.

The book feeds into the growing international interest in the study of places with rich colonial and postcolonial histories, not only in India but all over the world.