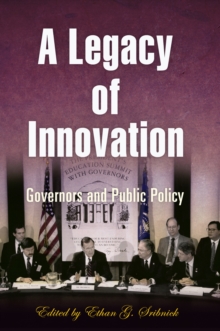 A Legacy of Innovation : Governors and Public Policy Hardback

From La Follette to Faubus, from Rockefeller to Reagan, U.S. governors have addressed some of the most contentious policy questions of the twentieth century.

In doing so, they not only responded to dramatic changes in the political landscape, they shaped that landscape.

The influence of governors has been felt both within the states and across the nation.

It is telling that four of the last five U.S. Presidents were former state governors. A Legacy of Innovation: Governors and Public Policy examines the changing role of the state governor during the "American Century." In this volume, top political scientists, historians, and journalists track the evolution of gubernatorial leadership as it has dealt with critical issues, including conservation, transportation, civil rights, education, globalization, and health care.

As the most visible state officials, twentieth-century governors often found themselves at the center of America's conflicting political tendencies.

A Legacy of Innovation describes how they negotiated the tensions between increasing democratization and the desire for expert control, the rise of interest groups and demise of political parties, the pull of regionalism against growing nationalism, and the rising demand for public services in a society that fears centralized government.

In their responses to these conflicts, governors helped shape the institutions of modern American government. As state governments face new policy challenges in the twenty-first century, A Legacy of Innovation will serve as a valuable source of information for political scientists and policy makers alike.