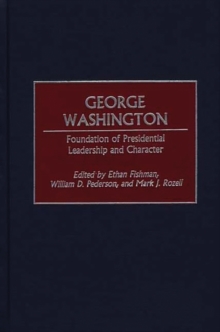 There have been many serious abuses of presidential power in recent decades, including Watergate, the Iran-Contra scandal, and the Lewinsky affair, subsequently Americans have demonstrated renewed interest in discussing the relationship between character and political leadership.

Through an investigation of the life and career of George Washington, often considered the exemplary moral president, the chapters offer a balanced scholarly contribution to this analysis. Fishman, Pederson, Rozell, and their contributors examine the legacy of Washingtons presidency.

Leading political scientists and historians describe and evaluate the impact of Washington's leadership on the institution of the presidency and on those who have since occupied the Oval Office.

In the contemporary era of almost endless speculation about the role of character in presidential leadership, an analysis of Washington's character and the model he established is especially germane. The chapters provide diverse interpretations of the value of understanding Washington's leadership and the character of the modern presidency.

Some of the scholars conclude that Washington indeed laid the foundation for good character and strong leadership in the presidency.

Others take a more critical approach and see Washington, like many of his successors, as a fallible human being who possessed both character strengths and weaknesses.

The lasting value of this analysis for political scientists, historians, and other students of the American presidency is that it demonstrates the continued vibrant debate over Washington's authentic legacy to the office.