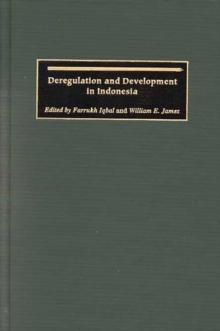 Deregulation and Development in Indonesia Hardback

Of the developing nations of East Asia, Indonesia came relatively late to liberalizing its trade and investment regime.

Only in the mid-1980s, when it was clear that oil revenues alone would not suffice and that a new engine of growth was needed, did the country's government swing behind a systematic deregulation effort.

All this combined to spark a labor-intensive export-led economic boom that was accompanied by an expansion in wages and employment and a boost in productivity.

This book documents how Indonesia truly became part of the East Asian miracle story starting in the mid-1980s.

Destined to become a leading case study of export-led development in Indonesia, this book grew out of a World Bank/Indonesian Economic Society Symposium held in Jakarta. There was, however, a parallel story as well, of crony capitalism and weak governance, that led to the financial and political crisis of 1997-98.

These aspects were reflected in continued protection of certain sectors where the cronies were active, in restrictions on domestic trade and competition that were left in place for their benefit, and in financial manipulations that were conducted to their advantage.

These aspects are noted as well in the book and pulled together in the concluding chapter, which takes the story up through the crisis years to the present.