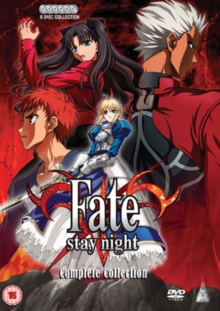 All 24 episodes of the Japanese anime series based on the computer game.

After Shirou Emiya witnesses an altercation between two supernaturally skilled warriors, he becomes drawn into a battle between seven magi and their seven servants, resurrected legendary warriors from around the world.

Paired with a powerful female servant known only as Saber, Shirou must now take his place as the seventh and last of the magi, and embark on the ultimate quest to find the Holy Grail.