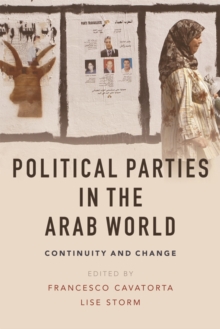 What is the role of political parties in such a context?

How do they support or undermine such authoritarian forms of rule?

What part have they played in the survival and transformation of political systems after the Arab uprisings?

What are the policy preferences of party elites and how do they connect with citizens' expectations?

How do parties challenge and reflect the main social cleavages?

Finally, what is the genuine significance of parties and party politics in a region struggling for some sort of democratic future?

This book attempts to answer these questions through a thorough theoretical and empirical examination and analysis of the most important aspects and traits of political parties and party politics in the Arab world, exploring cases from across the region.Key FeaturesSets out an innovative research agenda on a under-studied topicProvides a comparative perspective on political parties across the regionAnalyses the ways in which political parties in the Arab world matter and develop Offers a more systematic understanding of the functioning of Arab regimes by incorporating the role political parties play in themIncludes case studies of Iraq, Libya, Tunisia, Egypt, Morocco, Algeria, Kuwait, Lebanon and PalestineContributorsLarissa Alles, University of St. Andrews Aurelie Daher, Universite Paris-Dauphine Loes Debuysere, Ghent UniversitySophie A Edwards, Independent ResearcherAnass El Kyak, Universite LavalManal A.