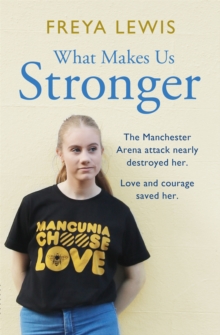 What Makes Us Stronger Hardback

'Freya Lewis is extraordinary' Katie Piper'A love letter to the NHS' Lorraine Kelly'A poignant story of courage and pain but, most of all, it is a striking testament to friendship.' Daily Express'A candid account of the terrorist attack and the effect it has had on her life.' The i'An unflinching story of grief, survival and love' YOU MagazineThe Manchester Arena attack nearly destroyed her. Love and courage saved her. Freya Lewis was just three metres away from the terrorist who detonated the bomb at the Manchester arena on the night of 22nd May 2017.

Her best friend Nell was tragically killed, but Freya - thrown forwards by the blast - somehow survived.

She suffered 29 separate injuries, was in a coma for five days, and wheelchair-bound for three months. Yet just 12 months later, she was on her feet, running the Junior Great Manchester Run and raising GBP60,000 for the hospital that saved her.

From her darkest moment, she found the determination to live life to the fullest, for herself, and for those who lost their lives. This is Freya's courageous story. But it is also the story of the amazing community that surrounded her, uplifted her, and ultimately saved her life. What Makes Us Stronger is a testament to the power of hope and positivity.