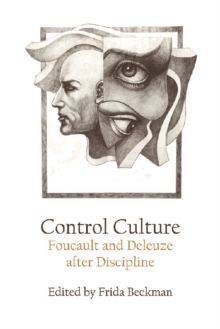 Starting from Deleuze's brief but influential work on control, the 11 essays in this book focus on the question of how contemporary control mechanisms influence, and are influenced by, cultural expression.

They also collectively revaluate Foucault and Deleuze's theories of discipline and control in light of the continued development of biopolitics.

Written by an impressive line-up of contemporary scholars of philosophy, politics and culture the essays cover the particularity of control in relation to various fields and modes of expression including literature, cinema, television, music and philosophy.