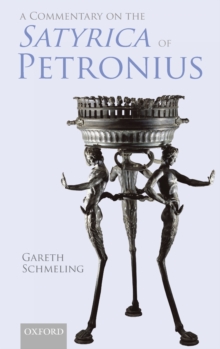 A Commentary on The Satyrica of Petronius Hardback

The Satyrica is a thrilling piece of literature and rare example of the Roman novel, credited to Titus Petronius.

It is as modern today as in the time when it was written under the Roman emperor Nero.

This is the first comprehensive commentary on the whole of Petronius' Satyrica, and an attempt to unify and comprehend, as much as possible, the fragmentary text by looking carefully at the bits and pieces which have survived.

The Satyrica's uniquenature as a historical document from the ancient world has meant that it has been studied vigorously by social historians; it provides rare insights into the lives of ordinary Roman people, such as the narrative about Trimalchio the Roman businessman, as well as documenting the evolution of Latin into the various Romancelanguages as we know them today.

Petronius puts into the mouth of each of his characters a distinctive and socially defining level of Latin, so that the world of the Satyrica is populated not by characters who speak a kind of Latin which made Latin a dead language, but by flesh and blood people who have made Latin live until today. Schmeling's commentary offers readers a comprehensive analysis of this historically important text through philological, linguistic, historical, and narratological discussions, while highlighting past doubts on Petronius' authorship of the Satyrica.