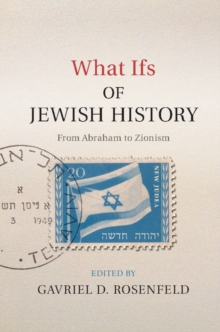 What Ifs of Jewish History : From Abraham to Zionism Hardback

What if the Exodus had never happened? What if the Jews of Spain had not been expelled in 1492?

What if Eastern European Jews had never been confined to the Russian Pale of Settlement?

What if Adolf Hitler had been assassinated in 1939? What if a Jewish state had been established in Uganda instead of Palestine?

Gavriel D. Rosenfeld's pioneering anthology examines how these and other counterfactual questions would have affected the course of Jewish history.

Featuring essays by sixteen distinguished scholars in the field of Jewish Studies, What Ifs of Jewish History is the first volume to systematically apply counterfactual reasoning to the Jewish past.

Written in a variety of narrative styles, ranging from the analytical to the literary, the essays cover three thousand years of dramatic events and invite readers to indulge their imaginations and explore how the course of Jewish history might have been different.