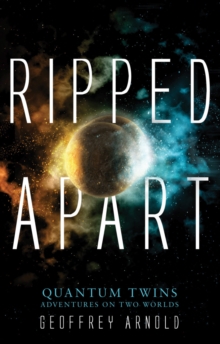 Part of the Quantum Twins - Adventures On Two Worlds series

Ripped Apart is a science-fiction novel about Quantum Twins, Qwelby and Tullia, teenage aliens who interfere with a forbidden experiment and find themselves transported to Earth - Qwelby in Finland and Tullia in Africa.

They need help to re-establish their telepathic connection, find each other, avoid capture and return home.

They say that their people arrived on Earth 75,000 years ago, were the cause of the development of the human race, and now need the help of those humans if their race is to survive.

This gripping page turner, which will appeal to sci-fi fans of all ages, takes the reader on a journey through the unseen worlds of quantum science and alternative states of consciousness.

This is the first of a four book series: 'Quantum Twins - Adventures On Two Worlds'.

The most interesting aspect is Geoffrey's connection with the Twins.

It started one Saturday afternoon when they told him to sit down with pad and pen, then they wrote what became the first nine chapters of Ripped Apart.

This makes the series unlike any other science-fiction novel on the market: a story created between the author and real teenage extraterrestrials.

Coming from a world of peace and harmony and surviving violence on Earth, they are deeply shocked when their first mental reconnection is violently severed by a teenager on their homeworld.

As they remain on Earth, they show their very human nature as they experience the confusion of their first romantic feelings - for humans.