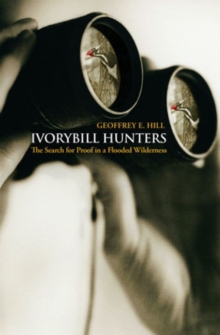 Ivorybill Hunters : Search for Proof in a Flooded Wilderness Hardback

The last documented sighting of the Ivory-billed Woodpecker-one of the rarest and most intriguing animals in the world-was noted over 50 years ago.

Long thought to be extinct, the 2005 announcement of a sighting in Arkansas sparked tremendous enthusiasm and hope that this species could yet be saved.

But the subsequent failure of a massive search to relocate Ivorybills in Arkansas made hope for the species' revival short-lived. Here, noted ornithologist Geoffrey Hill tells the story of how he and two of his colleagues stumbled upon what may be a breeding population of Ivory-billed Woodpeckers in the swamps of northern Florida.

He relates their laborious attempts to document irrefutable evidence for the existence of this shy, elusive bird following the failure of a much larger research team to definitively prove the bird's existence. Hill tells of his travails both in and out of the vast swamp wilderness, pulling back the curtain to reveal the little-seen political maneuvering that is part of all modern science.

He explains how he and his group decided who to exclude or include as their findings came in, and why they felt the need to keep their search a secret.

Hill returns repeatedly to how expectations can guide observations, and how tempting it is to oversell evidence in the face of the struggle between anoverwhelming desire to find the bird and the need to retain integrity and objectivity. Written like a good detective story, Ivorybill Hunters also delves into the science behind the rediscovery of a species, explaining how professional ornithologists follow up on a sight record of a rare bird, and how this differs from the public's perception of how scientists actually work.

Hill notes the growing role of amateurs in documenting bird activity and discusses how the community of birders and nature lovers can see, enjoy, and help preserve these birds. Ivorybill Hunters will prove a fascinating read for those with an interest in natural history, adventure, environmental conservation, and science, as well as the more than forty-six million Americans who now call themselves birdwatchers.