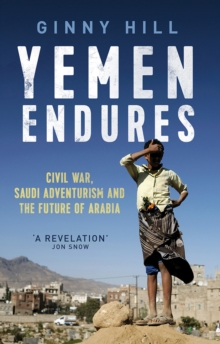 Why is Saudi Arabia, the world's largest oil exporter, involved in a costly and merciless war against its mountainous southern neighbour Yemen, the poorest country in the Middle East?

When the Saudis attacked the hitherto obscure Houthi militia, which they believed had Iranian backing, to oust Yemen's government in 2015, they expected an easy victory.

They appealed for Western help and bought weapons worth billions of dollars from Britain and America; yet two years later the Houthis, a unique Shia sect, have the upper hand.In her revealing portrait of modern Yemen, Ginny Hill delves into its recent history, dominated by the enduring and pernicious influence of career dictator Ali Abdullah Saleh, who ruled for three decades before being forced out by street protests in 2011.

Saleh masterminded patronage networks that kept the state weak, allowing conflict, social inequality and terrorism to flourish.In the chaos that follows his departure, civil war and regional interference plague the country while separatist groups, Al-Qaeda and ISIS compete to exploit the broken state. And yet, Yemen endures.