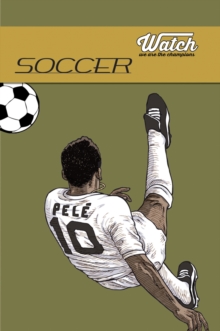 Soccer WATCH: We Are the Champions Hardback

Great sports figures are the modern equivalent of heroes.

An history of sport is necessarily a story of individuals: tales of redemption and emancipation from modest upbringings, stories of sacrifice and success. Each volume of WATCH, We are the champions, the new series from Officina Libraria, will narrate the history of a sport through 30 engaging biographies of its great champions. And since the publishing house is specialised in high-quality illustrated books, the riveting stories written by Giorgio Martignoni are illustrated by the masterful hand of Roberto Ronchi, in a colourful explosion of energy, icons of those magic moments in sports, from the goal that assigns a Champions League in the last minutes to the climb on the famous Alpe d'Huez, from the three-pointer that decides a collegiate championship to the knockout hook of a boxing match. The biographies of thirty great champions are exciting as a run toward the goal posts, they keep you holding your breath as in those seconds that precede a penalty kick, and in each of them there is a curious aspect, an heroic moment and a touch of poetry. The books starts with the great footballers of the pre-war era, such as Sindelar and Meazza, to finish with today's idols, Lionel Messi and Cristiano Ronaldo, and those of all the champions that have gifted us with those unforgettable moments, at the stadium or in front of the small screen.

Who doesn't remember Pele or Maradona? Who has never heard of George Best or Cruyff? Beckenbauer or Jascin?