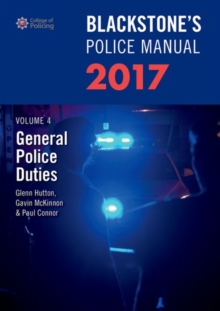 Blackstone's Police Manuals 2017, endorsed by the College of Policing, are the only official study guides for the NPPF Step Two Legal Examination (formerly OSPRE (R) Part I).Straightforward and accessible, Blackstone's Police Manuals are the only resource used by question writers when preparing a NPPF Step Two Legal Examination and each of the four volumes forms part of the only comprehensive version of the 2017 syllabus.

Blackstone's Police Manual Volume 4: General Police Duties 2017 covers areas including Terrorism and Associated Offences, Complaints and Misconduct, Weapons, and Public Disorder, as well as PACE Codes A, B, and G.

For complex or commonly misunderstood areas, there are handy Keynote boxes, which point to relevant case law or provide an example of how material is used in a practical sense, helping you to establish the connections between legislation and police procedure.

The 2017 editionhas been updated to incorporate all recent legislative developments and case law, including coverage of the Anti-social Behaviour, Crime and Policing Act 2014, the Serious Crime Act 2015, the Criminal Justice and Courts Act 2015, the Deregulation Act 2015, the Counter-Terrorism and Security Act 2015 and theCriminal Procedure Rules 2015.

There are also revised chapters on Hatred and Harassment Offences, Anti-social Behaviour, and Public Order, and a new chapter covering Protection of People Suffering from Mental Disorders. Also available in the series are: Volume 1: Crime 2017, Volume 2: Evidence and Procedure 2017, and Volume 3: Road Policing 2017. 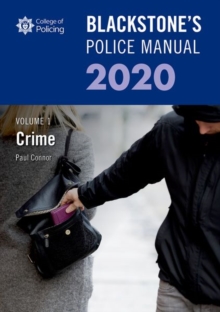 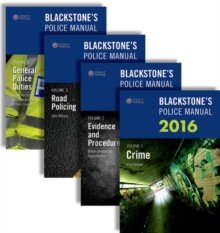 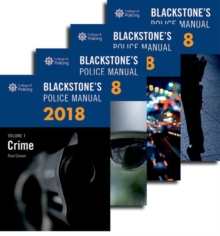 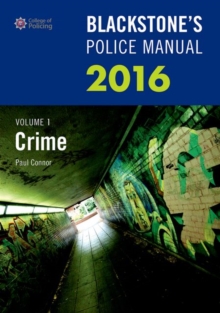