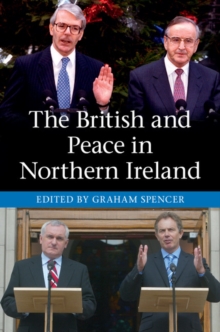 The British and Peace in Northern Ireland : The Process and Practice of Reaching Agreement Paperback / softback

How did the British Government and Civil Service shape the Northern Ireland peace process?

What kind of tensions and debates were being played out between the two governments and the various parties in Northern Ireland?

With a unique format featuring self-authored inside accounts and interview testimonies, it considers a spectrum of areas and issues that came into play during the dialogues and negotiations that led to the 1998 Good Friday Agreement and political accommodation in Northern Ireland.

This book provides a compelling insight into what actually happened inside the negotiating room and how the British tried to shape the course of negotiations.