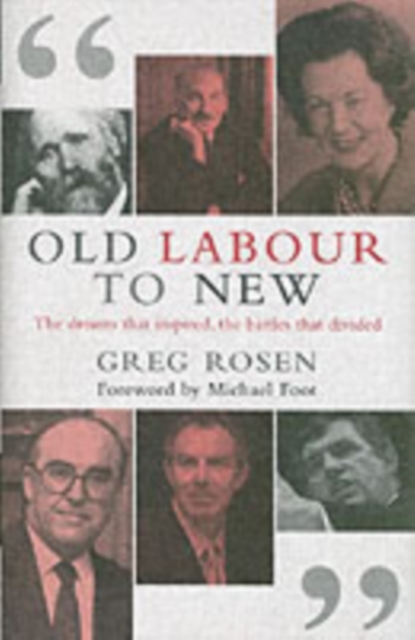 Old Labour to New : The Dreams That Inspired, the Battles That Divided Paperback / softback

The story of the people's party - in its own words - Foreword by Michael Foot - High profile launch with senior members of the Labour Party - Published to coincide with the Labour Party Conference - Over 100 historic Labour speeches Keir Hardie, Aneurin Bevan, Michael Foot, Neil Kinnock, John Smith...The roll call of Labour's great orators goes on and on.

Their words illuminate the story of the party, its triumphs and its battles.

In OLD LABOUR TO NEW Greg Rosen gathers together the greatest speeches from over one hundred years of Labour Party history and places each in context to form a unique history of the party.

Among these historic speeches are: Keir Hardie's speech to the Independent Labour Party's first conference in 1893 ('The demand of the Labour Party is economic freedom'); Bevan's 1948 attack on the Tory party ('so far as I am concerned they are lower than vermin'); more recently, it takes the story of Harold Wilson's 'White Heat' through 'In Place of Strife,' the battles over Europe, the 'Winter of discontent', Militant and the Miners' strike and the story of New Labour through to the war in Iraq.