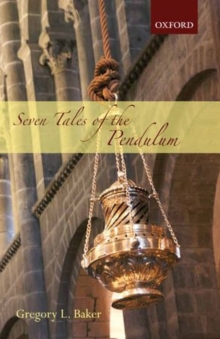 Seven Tales of the Pendulum Hardback

The pendulum is a unique physical system which exhibits remarkably varied and complex behavior under many different conditions.

It is also a system which, in its many manifestations, has left a significant imprint on human thought and culture.

Using graphs, figures, and narrative to explain scientific ideas and models, Gregory Baker gives a lucid account of the physics of the pendulum, showing the reader how the context of the pendulum progresses over four centuriesfrom that of a simple system of classical physics, to that of a chaotic system, and eventually to that of a modern quantum system.

He also describes its fascinating presence in cultural history, from its role in timekeeping and measurements of the earth to its importance as a literary symbol of doom. Seven 'tales', detailing different important facets of the pendulum, show the exciting diversity of the science of the pendulum, and its untold significance in the history of human intellectual development.