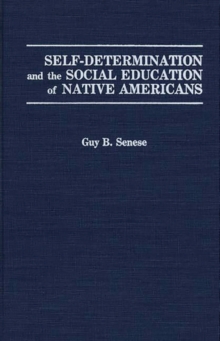 Self-determination and the Social Education of Native Americans Hardback

by Guy B. Senese

Self-determination, a crucial conceptual development in American Indian social and educational policy and the force behind current Indian policy programs, is critically analyzed in this volume by a scholar/educator who has worked closely with Native Americans.

Guy B. Senese explores the wide gulf between the rhetoric and the reality of self-determination in contemporary Native American education, an area that has received little scrutiny by students of American education policy.

Senese contends that many aspects of Native American self-determination policy work against the full realization of that policy and are in fact contradictory.

Arguing that self-determination is not a unified, coherent policy moving toward more community and tribal self-government and economic self-help, Senese makes a strong case for his theory that the policy has been a vehicle to promote a smooth transition toward a termination of the tribal/federal relationship.

This book is an excellent addition to the developing literature that questions the pluralist assumptions of the late twentieth century liberal/progressive social policy. Each of the volume's three parts addresses a basic assumption of Native American social education policy.

Part I shows how self-determination policy grew as a response to the moral requirements of reservation development in a political climate of American patriotism.

Part II shifts the focus more directly to schooling, including a discussion of the concept of community control and the 1975 Self-Determination and Educational Assistance Act.

The concluding section analyzes the dialogue that resulted from the fragmentation of Native Americans, who were divided over the meaning of self-determination.

How the concepts of trust and sovereignty have created grounds for the expropriation of the meaning of self-determination is also explored.

This volume's analysis of American Indian social and educational policy makes it required reading in the areas of Ethnic Studies, Educational Policy Studies, Ethnohistory, and Sociology of Education.

The work is an important addition to the Education and Ethnic Studies collections of public and university libraries.

Also by Guy B. Senese 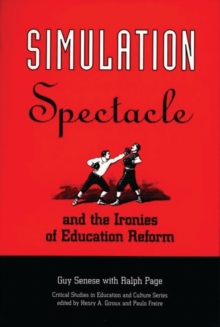 Simulation, Spectacle, and the Ironies... 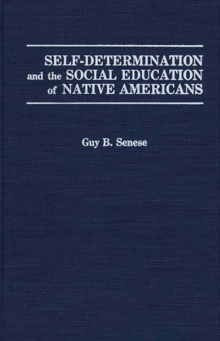 Self-Determination and the Social...