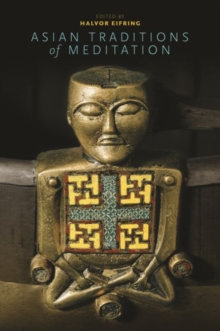 Meditation has flourished in different parts of the world ever since the foundations of the great civilizations were laid.

It played a vital role in the formation of Asian cultures that trace much of their heritage to ancient India and China.

This volume brings together for the first time studies of the major traditions of Asian meditation as well as material on scientific approaches to meditation.

It delves deeply into the individual traditions while viewing each of them from a global perspective, examining both historical and generic connections between meditative practices from numerous historical periods and different parts of the Eurasian continent.

It seeks to identify the cultural and historical peculiarities of Asian schools of meditation while recognizing basic features of meditative practice across cultures, thereby taking the first step toward a framework for the comparative study of meditation. The book, accessibly written by scholars from several fields, opens with chapters that discuss the definition and classification of meditation.

These are followed by contributions on Yoga and Tantra, which are often subsumed under the broad label of Hinduism; Jainism and Sikhism, Indian traditions not usually associated with meditation; Buddhist approaches found in Southeast Asia, Tibet, and China; and the indigenous Chinese traditions, Daoism and Neo-Confucianism.

The final chapter explores recent scientific interest in meditation, which, despite its Western orientation, remains almost exclusively concerned with practices of Asian origin. Until a few years ago a major obstacle to the study of specific meditation practices within the traditions explored here was a widespread scholarly orientation that prioritized doctrinal issues and sociocultural contexts over actual practice.

The contributors seek to counter this bias and supplement concerns over doctrine and context with the historical study of meditative practice. Asian Traditions of Meditation will appeal broadly to readers interested in meditation, mindfulness, and spirituality and those in the emerging field of contemplative education, as well as students and scholars of Asian and religious studies.