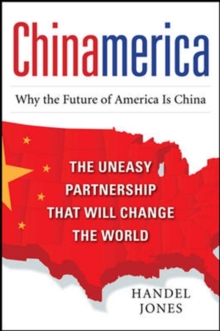 CHINAMERICA: The Uneasy Partnership that Will Change the World Hardback

Praise for ChinAmerica"A must-read for anyone seeking to understand the emergence of China as a major industrial power and how profoundly it is changing the world economy." -Dr. Henry Kressel, author of Competing for the Future: How Digital Innovations Are Changing the World"This book is essential reading for business leaders and observers everywhere as this dramatic shift of economic and political power from the West to China continues."-Ray Bingham, chairman, Flextronics International"ChinAmerica provides extremely in-depth visibility into the interactions and interdependency of China and the United States.

I believe everyone who takes the time to read it will learn of the many challenges and opportunities that exist for both China andthe United States." -Richard Kulle, president and CEO, gEM Services, Inc. "Handel Jones lays out concisely what China is doing right and the United States is doing wrong.

This is a wake-up call because China today is the most serious economic competitor that the United States has ever faced.

Conventional wisdom pits China against the United States in a war for economic supremacy.

However, in ChinAmerica, Handel Jones, one of the leading experts on China's industrial and economic emergence, demonstrates that the wave of the future is cooperation between the two titans, not conflict-and how America will benefit from increased economic engagement and competition with China.

To some, conflict between China and the United States appears to be both imminent and unavoidable (indeed, in some eyes, the battle has already begun).

But this perspective badly overlooks one vital fact: both nations have no choice other than to act in their mutual interest.

Focusing on several key areas of conflict and mutual interest, Jones gives a thorough and eye-opening portrait of the policies, history, and habits that have led to the intersecting fortunes of the two superpowers.

Jones also outlines actions the United States must take to hold on to its leadership role by forging equilibrium with China that's based on mutual respect and dependence.As Jones makes clear, the contrast between the two powers couldn't be more startling: while China is amassing through trade nearly one-fourth of the world's foreign exchange reserves (nearly three-fourths of that amount in USD), the United States excels mostly as a consumer of finished goods, with Americans unconcerned about debt and other consequences of living beyond their means.

Developments such as these, however, don't necessarily put the nations on a collision course.

To Jones, these facts point to a very real opportunity for Chinese and American governments and businesses to work together rather than be separated by economic tensions.Filled with cogent analysis and expert advice, ChinAmerica is the most comprehensive look yet at the interdependency of the world's two leading powers.

This is a book that will change minds about Sino-American relations.

He has been involved withChinese governments and state-owned and private businesses for more than 30 years, and he is one of the leading experts in directing international business investment in China and Chinese corporate investment/expansion overseas.

He lives in Los Gatos, California."Handel Jones lays out concisely what China is doing right and the United States is doing wrong.

This is a wake-up call because China today is the most serious economic competitor that the United States has ever faced.