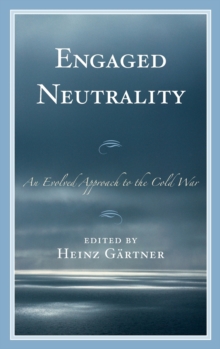 Engaged Neutrality : An Evolved Approach to the Cold War Hardback

The notion that neutrality is a phenomenon only relevant to the Cold War is false in many ways.

The Cold War was about building blocks, neutrality about staying out of them.

From 1975 until the end of the Cold War, neutral states offered mediation and good offices and fought against the stagnation of the detente policy especially in the framework of the CSCE.

After the end of the Cold War, neutral states became active in peace-operations outside of military alliances.

The concept of neutrality has proven time and again that it can adapt to new situations.

In many ways, small neutral states have more room to maneuver than members of alliances or big powers.

They have more acceptance and fewer geopolitical interests.

Neutrality has been declared obsolete many times in its long and layered history., yet it has also made many comebacks in varying forms and contexts.

Neutrality in the 21st century does not involve to staying out but engaging.

In contrast to disengagement and staying out, engaged neutrality entails active participation in the international security policy in general and in international peace operations in particular.

Engaged neutrality means involvement whenever possible and staying out only if necessary.