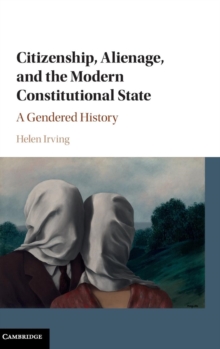 by Helen (University of Sydney) Irving

To have a nationality is a human right. But between the nineteenth and mid-twentieth centuries, virtually every country in the world adopted laws that stripped citizenship from women who married foreign men.

Despite the resulting hardships and even statelessness experienced by married women, it took until 1957 for the international community to condemn the practice, with the adoption of the United Nations Convention on the Nationality of Married Women.

Citizenship, Alienage, and the Modern Constitutional State tells the important yet neglected story of marital denaturalization from a comparative perspective.

Examining denaturalization laws and their impact on women around the world, with a focus on Australia, Britain, Canada, Ireland, New Zealand and the United States, it advances a concept of citizenship as profoundly personal and existential.

In doing so, it sheds light on both a specific chapter of legal history and the theory of citizenship in general.