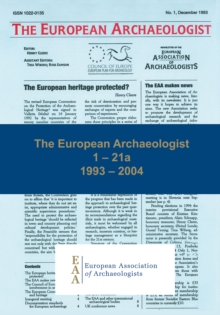 "This volume gathers together the first 10 years of The European Archaeologist (ISSN 1022-0135), from Winter 1993 through to the 10th Anniversary Conference Issue, published in 2004 for the Lyon Annual Meeting.

The first issue announces the Ljubljana Inaugural Meeting, and documents the work of the International Steering Committee which promoted the Association.

Readers can then trace the initial development of their brainchild, from the euphoria of a post-1989 Europe where Archaeologists could at last freely communicate to the consolidation of the Association as a key player in the Archaeology of the continent.

Perhaps the most striking thing, reading through these early issues of TEA, is how the central concerns of the EAA, for heritage, commercial and academic archaeology have remained central to its content.

This volume is published as the Association meets in Istanbul for its 20th Annual Meeting." -from the preface by Mark Pearce