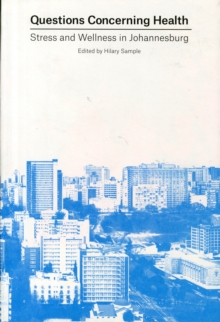 At a moment when the world's population increasingly lives in urban settings, the public health of cities-or the intersection of stress and wellness with architecture and urbanism-is a matter of pressing concern for designers.

Questions Concerning Health presents a number of essays by experts on urban health and Johannesburg in particular, including the design proposals of eight students who participated in the research studio.